Raffi and the Dalai Lama in a conversation on Child Honouring 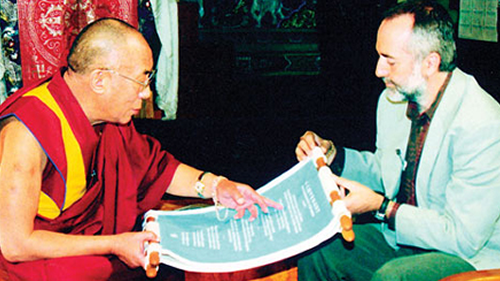 His Holiness the Dalai Lama and Raffi Cavoukian

RC: (showing a book)
I was reading this book, where you talk about how it would take a worldwide scale of a revolution in our commitment to and practice of universal humanitarian values, and I couldn’t agree more …and last time when I was with you, I showed you a Covenant that I’d written, A Covenant for Honouring Children, and this time, I brought you as a gift … a special version of that Covenant to give to you on this occasion.

RC: The idea we’re working with is to move society towards honouring its children in every way, so as to remake society so that every aspect of its design and organization shows the love for the child. If we can have a universal ethic with the child at the heart of it, because everyone was once a child—even if we don’t have children of our own…

So I’ve been thinking of your words quite a bit over the last few years, looking for an ethic that’s not tied to any religion but to just human experience.

Would you care to say a few words about the subject of honouring children, what it would mean.

HHDL: Whenever I have the opportunity of sharing with other people: I always stress the importance of promoting of human values and religious cultural relations.

So since [in] the child, right from the beginning the potential of these values [is] there, so, special care [is needed] to preserve this potential and also to increase this potential. So the child, before speaking, very young age, I think, the prime time maybe, you see, to show them genuine human love, compassion, caring. Then eventually when they begin to develop their mind and their body, of course then, physically also, [they] grow better or well, and then, most important, those children who grow up in the atmosphere of human affection, then these children eventually I think [find it] much easier to show other people genuine love, compassion, affection—these things. So in order to promote human values, the work must start from a young age.

RC: From the beginning.

HHDL: From the beginning.
And secondly, the past, whether glorious or miserable, is already gone. Important is the

future, so when we think about the future: the younger generation—these are the seeds of the future. So therefore, in order to build safer happier world, with children is the foundation. So therefore, I always very much admire your work. So this is, I think, [the] responsibility for everybody.

RC: This is what I want to do in the next 20 years: plant the seeds of a social revolution that perhaps we have not seen before, around the universal ethic of the young child. Because if we honour that child fully, we have to honour mother, we have to honour the supportive father, the extended family and outward. And of course Mother Earth.

RC: We reduce suffering… the Buddhist texts talk about reducing suffering in the world and I think to myself, if we only gave the young child priority attention, imagine how much unnecessary suffering would be reduced!

HHDL: Exactly, exactly. Very true, very true.
I think the world free from any trouble, that’s I think impossible. Because so long as the world remains, so long as we human beings remain there, some kind of trouble there… (Laughter.)

So now, non-violence does not mean we remain indifferent. Non-violence means we fully engage the problem or the trouble … we need more courage, more will, more self confidence. For that, one important thing is to be truthful, open. For some of the children’s minds, the surrounding, the compassionate surrounding, [if] honest, then children growing up in those circumstances are more open, more truthful…

RC: And perhaps if we respect their thoughts and their own voice in the early years, then they grow up with a sense of themselves…

HHDL: Right, that’s right–more self-confidence, less fear. So through that way, I think for children who grow up in that atmosphere, maybe easier to practise honest truth.

RC: To cultivate it from an early age…

HHDL: Yes. Children who grow under fear, beating, abuse, then it is compelled on them to act in a different way, saying something or doing something different.

RC: Surely it’s by our example that they will learn a code of conduct for themselves. HHDL: That’s right.

RC: The other point that I’ve been working with is that environmental protection for the young is a human rights issue, because they’re still developing. This is why in the Covenant, at the close of it, we talk about safeguarding our most vulnerable citizens. So there’s an aspect of environmental protection for them that, to me, is on the scale of a human rights issue for the very young.

RC: Thank you for today. Thanks so much for your continued blessings on all of us.

HHDL: (takes RC’s hand)
Your work, wonderful work–very needed. We need such people. No national boundary, no religious boundary, no cultural boundary, we are same. We are citizens of same world, one world, one blue world, a small planet.
How long it remains no one knows. But [while] it remains, it should be a peaceful, happy world.

In a spirit of inclusion, “Every child” now replaces the original “Every girl and boy” (written in 1999) that put the girl child first to stress the need for respect for girls and women worldwide. (It is well known that when girls are valued and respected, society prospers). The Raffi Foundation affirms the need to respect people of all genders. For it is the human heart that beats in each of us.
Scroll to Top
1 Shares
Share1
Tweet
Email